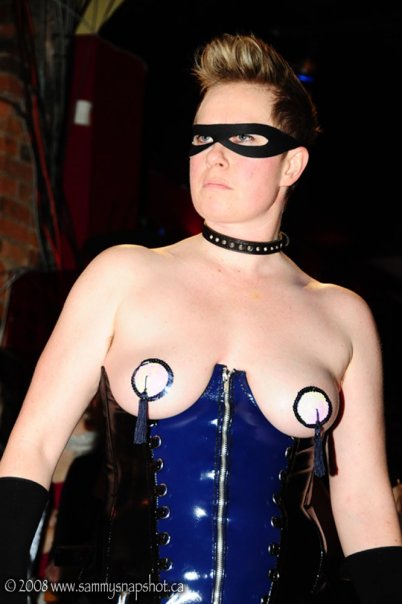 Flare, Drag King from Toronto Canada. One of the first kings to tassel twirl.  Photo by Sammy Snapshots (2008)

Where do you live (and perform): Live – Toronto, Ontario, Canada – perform all over the world

Gender: Out of drag She – In drag He

Length of time performing: 22 years performing – I have done monthly performances almost the whole time, give or take a few years when I was coupled and didn’t perform as much – but so many I couldn’t even guess a number.

What you refer to yourself performance wise: Drag King and Draglesque 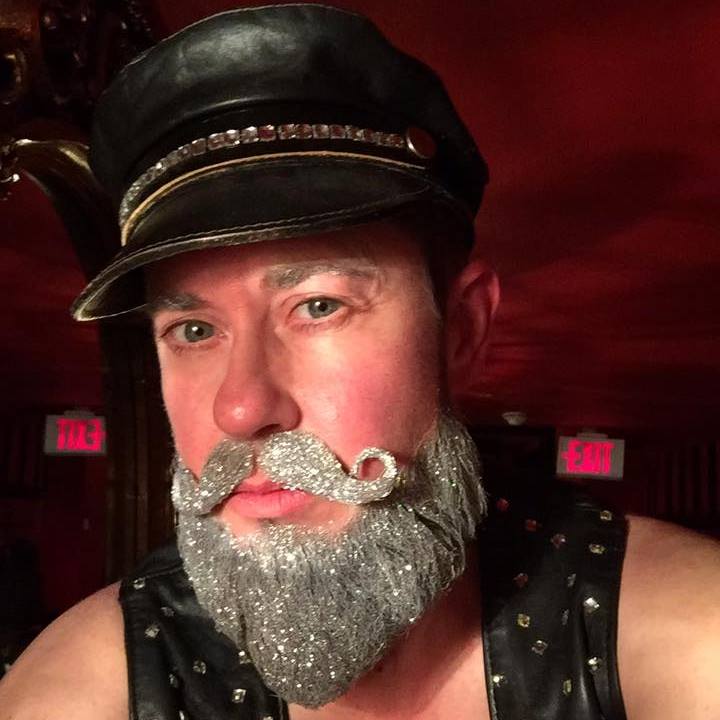 Why do you perform?  To share with others that gender is fluid, to share stories, to be a character, and to show that a human can be sexy/attractive outside of the square box models that I used to only see on TV and in print.  Over 22 years this has changed.  I am seeing now more gender fluidity in mainstream media.

How would you describe your performance style: I’m a character performer.  I find a song I like, a story develops with a character in mind, and then I breakdown the song as the character would.

What /who inspires you:  Other performers who push the boundaries and are also characters.  Two kings I’m inspired by right now are the Qzars from Austin, Texas.  Their concept, makeup, outfits, and delivery is so energetic, different, and visually appealing.  I want to join their band.

Some information about your costumes: I currently live in a loft studio and 80% of its use is for my drag costumes.  I live in a big ol’ tickle trunk!

Your favourite act (of your own or someone else’s) and why: My favourite act of mine is my newest one “I want to know what love is” by Foreigner.  It’s my favourite because I dress up as this big bearded 70’s guy who is still trying to find love the ‘bad old fashioned way’…he doesn’t get ahead.  I love it cause it’s so camp, the song is one of my favorites, and deep down I’m kind of that guy.

Biggest challenge as a performer: EGO – I’m a performer and I’m a producer.  I’ve seen what EGO does to a well mannered person.  The trend I’ve seen over the years is this: a new performer takes to the stage and they are nervous, they do it, they get their jitter relief, they get their applause and they are filled with acceptance and adrenaline.  This first wave they are humble and grateful.  Then, as they build, and get more attention something shifts from humble to cocky to arrogant.  I think what happens is someone who may not be considered ‘mainstream attractive’ or doesn’t feel validated in themselves somehow gets a new form of attention.  And most of us, except for the theatre kids, aren’t used to it and aren’t prepared for how it can change you.  When EGO comes in people get competitive and actually unsupportive of one another.  Been in many a dressing room where someone is rude to another performer or even the Producer because they think they are Elvis not just playing him.

Some of your achievements: Headliner of the following: Great Big International Drag King Show – Washington DC; Saturday night Headliner 2015 – Fierce! International Queerlesque Festival; Headliner 2016 – Austin International Drag Festival.  Sat on the IDKE (International Drag King Community Extravaganza) for ten years helping the IDKE festival continue to move from different cities.  I’m one of the first drag kings in the world to twirl tassels.  Started in 2003.  I have found out that there was a Boylesque troupe in San Francisco at the same time (I’m in Canada) where the drag kings twirled tassels.  When I started I had never seen another king do it and I was already at an International level.  I was on Maury Povich and Queer as Folk.  I made a documentary called “A Drag King Extravaganza” about the first 10 years of IDKE which is distributed by Frameline.

Social media handles, any links you want to share:  Currently working on the website dragkinghistory.com with Ken Vegas and Mo.B.Dick – site should be up by 2019.

Something you would like to tell readers: If you want to try drag DO IT.  And know Drag can encompass any idea, character, style that you want (as long as you don’t culturally appropriate or act in a violent non-consensual way towards others).  Be creative and use the stage to express your creativity.  Also be mindful of your audience.  I change my acts according to whom my audience is.  They are the ones coming to be entertained.  Your job is to entertain them, so keep them in your mind as you create. xo 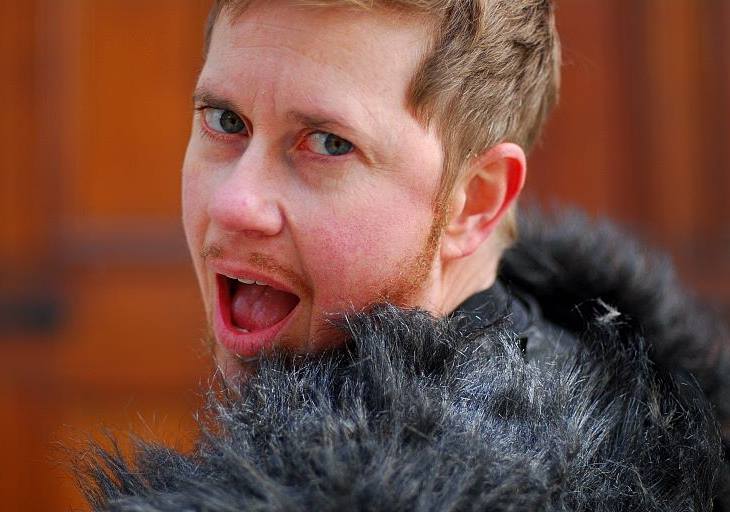 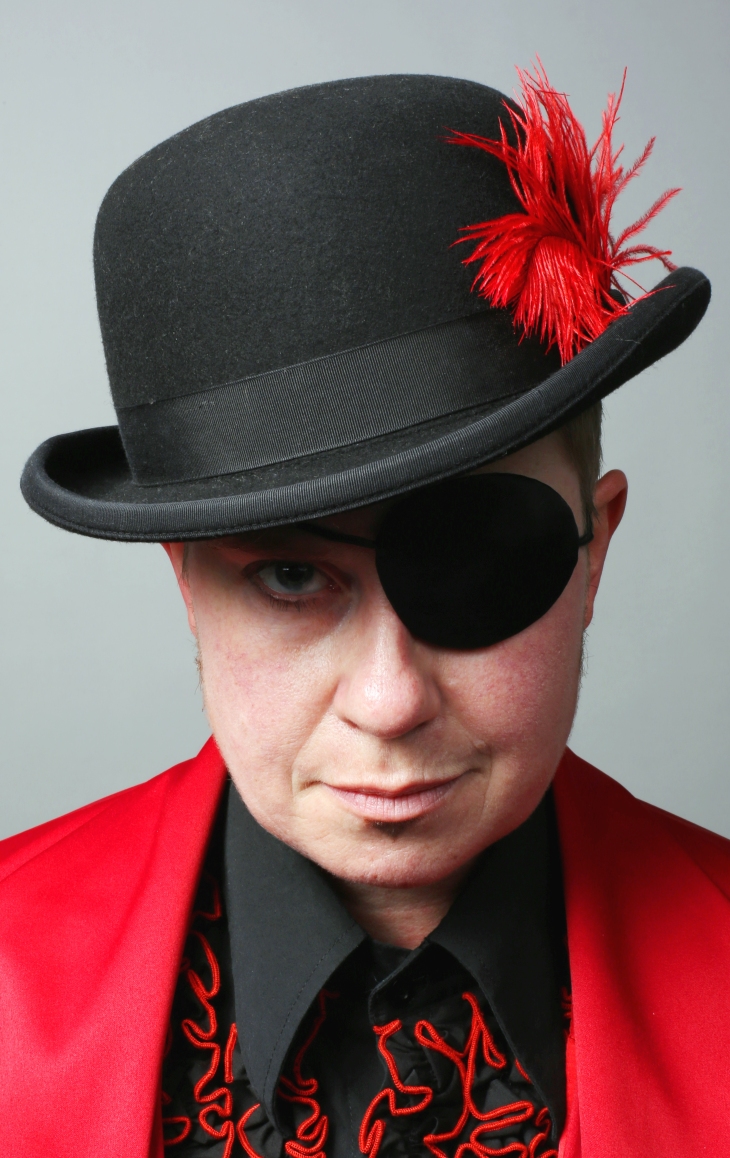